“Remote Monitoring is the Killer Application for IP Surveillance”, finds Axis IPSEC 04 Survey Market research conducted by Agility PR on behalf of Axis Communications (UK) Ltd at the International IP Security Exhibition & Conference (IIPSEC 2004).  At the end of January, it found that 40 percent of attendees ranked remote surveillance via the network as the most attractive application for the deployment of IP surveillance rather than traditional analog CCTV installations.

The second largest reason for the selection of IP surveillance over CCTV (with 20 percent of the vote) was the superior quality of camera output and recordings offered by networked solutions, according to a wide cross-section of the security and IT community members who were attending IPSEC this year.

For Installation Price including Auto Dialler go to Wireless Alarms
We Install, Service and Repair Wired Alarms, Wireless Alarms and CCTV throughout the UK. Just contact us for friendly advice on telephone number (01274) 614650 Mobile 07813 779273 E-mail sales@adalarms.co.uk

A speech-dialler can be fitted to your alarm system and, on activation, will ring up to nine telephone numbers repeatedly until it is acknowledged. A common message is played (pre-recorded by the customer), giving the address details, followed by a second message informing of alarm activation. Auto Dialler 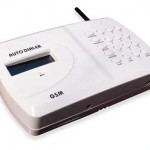 It can also be used in conjunction with smoke detectors that have been wired to your security alarm in a fire zone. On activation, the alarm will set off with a different sound indicating fire and your digital dollars rings out (if nobody is in) with a message warning of fire this time. Another option is the alarm may be wired to a panic button by your bedside, informing of illness.