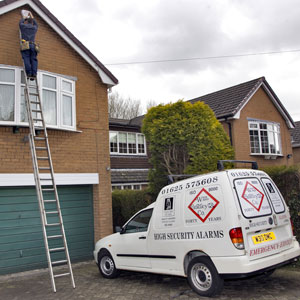 Wireless and wired security Alarms do need Servicing, but it is not crucial that they are serviced every single year.

Sometimes your insurance company will either encourage or even insist that you have your security alarm serviced on an annual basis.

We service the Yale Wireless Alarm from £68.00 including the batteries.When a Yale alarm starts to produce the following signs its time for a service.When arming the system you get five beeps instead of one. Pir sensor and door sensor have a constant LEDs flashing.Experiencing false alarm activations – inability to disarm alarm when activated. A Low Battery warning and fault display at the control panel (6400 and 6300 systems) Any 0f the these symptoms means the alarm needs a complete set of new batteries that usually last over two years

My company AD Alarms do provide this service and issues a completion certificate. Some insurance companies offer a percentage off your policy because you about the security alarm serviced each year.

However the actual fact is the hardwired security systems main control battery can have a lifespan of up to five years. The battery in the control panel is there as a secondary supply, so if you have a mains power cut, the system will be held and still be functioning for a good number of hours without any problems caused to the system or any false alarm.
But having said that the commonest fault that you get with a hardwired security alarm is that the control panel battery has not been replaced for a number of years and is losing its power and as soon as the mains electricity goes off for some reason, one of two things will happen. As soon as the mains electric goes off and the control panel

e device from a landline autodialler into a wireless version. Now if the buildings telephone lines are cut from outside in an attempt to stop the autodialler working it will still send out the message to the wireless network. For more details follow this link GSM Gateway for conversion to Wireless Autodialler.

At this point,  if the outside self acting siren box still has battery power left, it will go into an alarm condition thinking that the system is under attack. The outside siren box is called “self acting” because it has its own battery backup and circuit board, which they’re primarily because if a burglar gets into the building and destroys the alarm control panel, the outside siren would continue to sound and strobe light would continue to flash. It would not be possible to stop the siren box without getting up to with ladders and disarming it, which is obviously an advantage when an intruder breaks into the premises. But this advantage does become a disadvantage in mains power failure when the control panel is getting a flat battery because the siren box cannot be stopped without putting up ladders and disarming it from outside. The worst scenario is if this happens during the night when people have a power failure while sleeping, obviously this can cause quite a problem.

However in the above example, if the outside box as also lost all its battery power, it obviously cannot go into an alarm condition when the mains failure happens and the battery in the control panel doesn’t hold the system. So you effectively have a dead alarm system until the mains power comes back on and then what usually happens is the entire system goes into alarm condition. There are a number of security alarm control panels that actual lockout when the power comes back on and without clearing the panel’s memory of the system and reprogramming the panel, the user will not be able to use their security system again. The only good thing about this situation is that the alarm system will not continue to be in alarm condition for more than 20 minutes, the maximum they are allowed to run.

When security alarm engineers conduct a service a hardwired system, they have a device for checking the amount of current still left in both the system batteries. There is also a test procedure for testing each individual circuit from the control panel and checking its impedance and that the sensors are working correctly.

It is deftly not a bad idea to have your alarm system serviced every year even though the batteries may not need replacing that often, because you will know the entire security alarm is functioning correctly and you will encounter any problems with your insurance company claiming you had a defective alarm due to its lack of service and testing.

Wireless Security Alarms do need servicing at least every two or three years for sure because they have batteries in each individual sensor which are usually alkaline batteries. Once again if an alarm engineer performs the alarm service they will do a full what test of the system to make sure that all senses are functioning properly including the outside siren box