A wired telephone speech dialler can usually wire into an existing security alarm system for approximately £50.00

Telephone speech dialler which works off the mobile network under £198.00

All prices are fully inclusive of tax 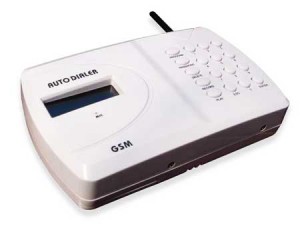 Our telephone speech dialler offers a great deal of security to any premises. The dialler is wired to the security alarm system usually so that if the alarm is activated it will immediately then ring up to 9 different telephones, which can be landline or mobile and playback a pre-recorded message by the owners informing of the intrusion. There is also a wireless version now which works off a mobile SIM card so that if the intruders have cut the telephone line it still ring out. This allows the owners of the premises to effectively act as their own monitoring station without the ongoing cost of paying for this from a private company which can be very expensive. This particular speech dialler will allow three different separate messages recorded, with three different trigger connections so that you can have one for the security alarm, one for the fire alarm and maybe one for a panic button in case somebody is in need of medical attention. So in fact you can cover any kind of occurrence as long as the message and the trigger is applied.